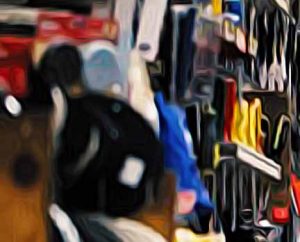 Maphira made sure that Vai entered the hardware store first, intending to never take her eyes off the woman. They hadn’t said a word on the drive over, although Vai had certainly tried, only to be cut off by Maphira after a single syllable got out. She simply wasn’t ready to listen to the lies of the snake that had slithered its way into the Resistance.

“We’re here – can I talk now?” Vai said once they were through the doors. “You dragged me with you on this little adventure for timber supplies sold in Cheltenham, or whatever it is you’re getting.”

“Would you just shut up and help me find the electrical supplies? I’m not in much of a mood to chat with the woman who stabbed me in the back and doomed humanity to this robot dystopia.”

Vai shrugged. “Fair enough. Just know it wasn’t personal. I was only doing it for the money. I convinced myself that the world was better off for being ruled by the Mechanists, but truthfully I was just blinding myself to the injustice going on so I could live comfortably. I’m not proud of it, especially now that my life hangs in the balance.”

Maphira rubbed her temples. “Would you please just be quiet? I don’t want your excuses or reasoning.”

And so Maphira dragged a once friend, turned enemy, turned – well, she wasn’t really sure what Vai was now – through a hardware store located close to Cheltenham, but not necessarily in the suburb of Cheltenham itself.

As they searched for the electrical supplies, the lights of the store suddenly went out, leaving them in pitch black. Maphira pulled out her phone and turned on the torch, although the device was only on 15% battery. Stupid planned obsolescence.

“Congratulations to our lucky shopper of the day,” said a voice over the loudspeaker. “Vai, you’ve just won yourself a great prize. Would you come to the front desk to collect it?”

“Uh oh,” Vai said. “Turn the light off. That’s the Great Mechanist. He’s here to finish me off for good.”