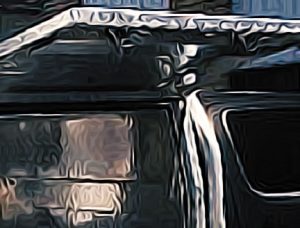 A terrible hum filled the air as the beast of a ute drove right toward us. On instinct, I pressed Gollo’s head into the sand, burying my own at the same time. I felt the rumbling as it tore towards us, over us, felt my hat get torn off my head by the torrent of wind.

Then it was past us. I stuck my face up, wiping away the grit so I could see clearly again. The ute had sailed over the top of us, barely missing our tucked-up forms, judging by the tread patterns in the sand. I grabbed Gollo and pulled him to his feet, watching the monster as it spun itself around to face us again.

‘It’s no use,’ Gollo cried, clutching my arm as ute revved its engine. ‘We can’t outrun it, not on the sands.’

‘I’m thinking,’ I snapped at him. ‘Come up with something!’

Without warning, the ute was off again, tearing towards us like we were bowling pins.

Gollo and I dove to different sides, and the ute sailed between us, unable to make up its mind in time.

‘Could we break it open?’ Gollo called to me.

‘No,’ I shook my head. ‘Not with one of those high quality aluminium ute canopies – we’d never make a dent.’

The ute made its choice and charged – at Gollo.

He let out a cry and dove behind a small dune, barely his height. The ute powered up the side of the dune, ramping over it and twisting in the air above Gollo. As it did, I saw the latch on its tray slide out, ever so slightly.

A plan began to form behind my eyes. I smiled, even as I calculated the odds in my head.

I just had to grapple with the back of the car, like I’d see them handle the ute trays near Melbourne. That’s if I could remember their technique.