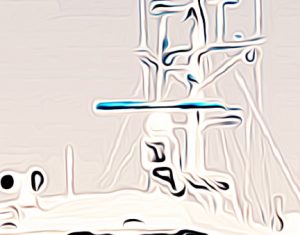 I entered the decal shed with a huge smile on my face. I couldn’t let them know that I was a pirate, so I had to do away with my typical brooding thief demeanour and replace it with a more palatable version. I had to convince them that I was a good, upstanding member of society rather than someone who stole from those good, upstanding members of society. It seemed to work.

I was welcomed into the store with a pleasant greeting and handed a pamphlet filled with information about the best boat wrap vinyl ideas. There were plenty in there – thousands, in fact. However, I came here to get my face in good quality vinyl, not some random image of a fish. When it was finally my turn to speak to the head designer, I was called to his private office, away from the hustle and bustle of the rest of the workshop. The door closed behind me, enveloping us in a cool, quiet room. The designer was a man who appeared to be middle-aged; he had a bristly black beard and lines beneath his eyes that showed he spent a lot of time outdoors. I could still smell the salt of the sea on him, and it made me instantly warm to the guy.

He explained that he was the head designer, and he could design everything from regular sailboat print, to aluminium boat wraps, and wraps for tinny boats. There were a lot of options, and he went through them all patiently and answered the questions I had. Of course, I was still posing as a general sailor, so I couldn’t be too specific about how much damage my boat tended to incur, otherwise it would be suspicious. I vaguely stated that I tended to sail on the high seas more often than not, and spent a lot of time on my boat, so it would likely be exposed to ocean conditions a lot more regularly than most other fishing boats would be. The designer man nodded.