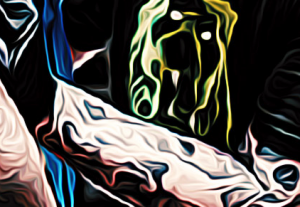 After the commotion inside, Gideon and Lorenzo took to the balcony to debrief. Overlooking the growing city of New Melbourne, the view wasn’t much compared to those experienced back in the surface days. For a post-Collapse view, though, it wasn’t bad. It felt more like looking out over a town at night than an entire city, but that would probably change in the next few years, as more people found their way down to the underground.

“So, the Zircon clan has decided to come after me,” Gideon said. “Not surprising, given I’ve been open about my intentions with the new Mornington Peninsula bubble. What do you think, my faithful fan of local realism tattoo artists?”

“Makes sense,” Lorenzo replied, glad the burning sensation from his tattoos was starting to settle down. “Without you, the peninsula project falls apart, giving them more influence to make New Adelaide a reality.”

Gideon scoffed. “New Adelaide. What a sick joke. It’s completely ignorant of how the world works. It’s no wonder the elites are so opposed to the Zircon Clan’s operations – with them planning to make New Adelaide a socialist society, why would any tycoon want that to happen?”

In theory, Lorenzo agreed with the Zircon Clan’s ambitions. A socialist society, free of rich elites, would have appealed to him years ago, when he was at that tattoo shop near Brisbane. He’d had no chance of joining the elite society. An equal utopia where people didn’t have to pay to express themselves with tattoos sounded perfect to him.

But he knew Gideon’s plans, and he knew that the Zircon Clan’s goals would never work out in reality. No, the elite would draw people back to their capitalist society with ease.

If they wanted a perfect society, they would have to get rid of the elites altogether. There was no other way.

“This humble tattoo artist thinks we are on the right path,” Lorenzo said. “I trust your plans, just as you trust me with your life. We will not fall for the old ways again.”